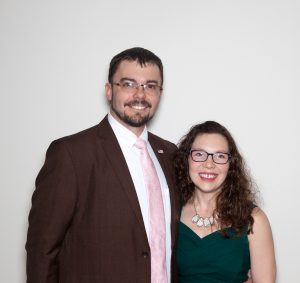 Robert (born and raised in Florida) attended Pinellas County public schools where he was able to see the difficult side of growing up outside of God and the church. In middle school he joined the band program and has been involved with music playing a large variety of instruments. In 2007, Robert came to know the Lord at Rock Church and after some personal struggles has been a fixture of the church since. Robert still continues his passion of music performing and using those opportunities to share God’s word and love with those he is performing for.

Rachel (born in Pennsylvania and raised in upstate New York) grew up in church and was saved as a youth. She had the opportunity to be home-schooled for high school, allowing her to graduate early, where the door opened to pursue nursing school. In that time she struggled spiritually; however toward the end of 2007, things turned around and she rededicated her life to God, awakening Rachel to her purpose and identity in God and pursing Him with everything, with a great cost. She then moved to Nashville to start fresh, and after living there for some time, one travel nursing assignment brought her to Florida and she’s been here ever since.

Rachel was led to Rock Church by the Holy Spirit and after being invited to join a group of people to lunch they met officially. After a whirlwind courtship and quickly realizing God had brought them together they were married in July of 2011. Robert serves as Head of the Audio Ministry and Rachel is the Head of the Flag Ministry and Children’s Church; they are both members of the Worship team. Where ever God places them, even outside of their personal comfort zones, Robert and Rachel bring their diverse testimonies to show the faithfulness of Jesus and His everlasting love.