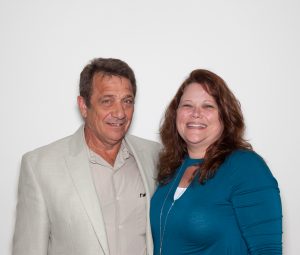 Bill started drinking at the age of 14 to cope with his life as he knew it. After completing a rehab program to deal with the drugs and alcohol that were consuming his life, he moved to Florida from New York in 1989 leaving that life behind. After 10 years clean Bill went through a divorce and fell back into the alcohol addiction.

Throughout her childhood, Melissa endured several types of abuses in her life.   At the age of 23, after leaving a 5 year physically abusive relationship with an alcoholic and moving from state to state, she found herself a single mom of three boys. Melissa then returned to Florida and went back to college before declining into poor health which was severe enough to place her on disability.

Bill and Melissa were lead to the Rock Church of Tampa Bay within months of each other over 10 years ago. Bill was still struggling with alcohol but he knew God was calling him back while Melissa received a miraculous healing from the Lord and was healed of all ailments. This is when God moved mountains with strength, wisdom, words of knowledge and persistence. While dating for three years, Bill became free from the alcohol addiction and God softened his heart towards Melissa’s boys until they became his own. Melissa was able to let go of the past fears, failures and hurts and let God order her steps. They were married at Rock Church in May of 2009. Bill has been free from alcohol for over 12 years and they have made a life together along with their sons.

Bill and Melissa are Deacons at Rock Church. Melissa serves as the Administrator and the Minister of Helps.