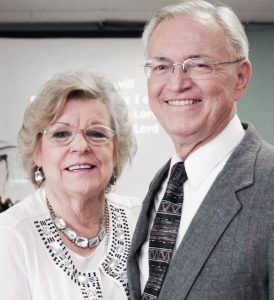 Waino (Wayne) was born in 1944 in Brooklyn, NY.  He is a retired Civil/Structural Engineer, having graduated from the University of Florida in 1967.  Wayne got saved in 1980 at Trinity Baptist Church in Clearwater.  He graduated with two-year lay-persons curriculum from Trinity Bible College in Dunedin, FL.  He also served as an Elder at the Christian and Missionary Alliance Church in Dunedin.  Wayne is the Treasurer and also leads a weekly bible study at an assisted-living facility.  Pastor Burgee affectionately says Wayne is so old that he pre-dates the dinosaurs.

Diane was born in Norwood, MA., the same year Israel became a nation state, after World War II.  She got saved in 1972 at Walpole Assembly of God in Walpole, MA.  She graduated from Wheelock College in Boston in 1994 with a degree of Associates in Science, majoring in early childhood.  Diane loves children, especially babies.  She owned and managed First Step Day Care and Pre-School Center in MA for 18 years.  She also organized and implemented day care centers in ten (10) cities in MA. Diane currently serves as the Head of the Nursery. She also has a heart to start a young women’s ministry, having been given a vision by the Lord over 25 years ago. Diane helped found three (3) churches and has held about every position imaginable in church ministry over a span on 42 years, which is pretty good for a woman that is only 39 years old.

Wayne and Diane were married in 2013 after the death of their spouses, Marcia and Tony, who both loved the Lord. They were married 46 and 40 years, respectively.  Wayne and Diane believe the Lord orchestrated their relationship, not only as husband and wife, but as partners in ministry, including hospital and nursing home visitation.  Between them, they have 10 children, 23 grandchildren and 4 great grandchildren (and counting). They believe age is only a number, but Wayne says Diane’s number is higher than his.